Gertie's coat sew along : THE COAT!

Yes, yes, yes, I am done with my crazy marathon!
My Gertie-Sew-Along-Inspired-Coat.
I thought that this coat would never see the outside of my apartment. But it did, and it got baptized in the first snow! It actually felt warmer then I thought it would be. I have already written so much about it and I decided to do a "Pattern Review" kind of format.

Description: it is described as a "feminine pea coat".


Did it look like the pattern envelope once you were done sewing with it? Like in the magazine, yes! 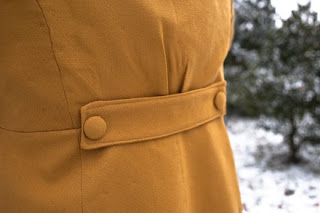 
What did you particularly like or dislike about the pattern? I liked the wide collar and lapel, the back belt, and the pea coat shape. Also, it was nice and easy to upgrade.My only real issue had to do with the length of the sleeves.

Pattern Alterations or any design changes you made: some upgrading from the waist down, and an FBA. I have added a cute hem decoration too. I have also shortened the sleeves to avoid a "box-effect".


Would you sew it again? Would you recommend it to others? I am still discovering the infinite sewing patterns. And when coats are concerned, I want to try others. However, I would completely recommend this pattern.


What about Gertie's Sew-Along? I am so happy that I took part. I have learned so much doing this. There is a point right after the muslin process where I was going to quit, but my Mister gave me a little nudge at the right time. I will completely refer back to the Sew-Along later, when I'll sew another coat or jacket!


I feel so happy that it is finished, and really proud of myself for not quitting! Also, every time I wear the it, my Mister keeps on saying "that is such a nice coat". It's so cute!

Laurwyn
My adventures into the sewing world... I have started sewing in April, 2010. Since then, I got completely addicted!